Federal Hall sits at the crossroads of American history, democracy, and commerce.

Right across from the New York Stock Exchange, the site of Federal Hall has been witness to history and a succession of buildings, each one important in its own right. 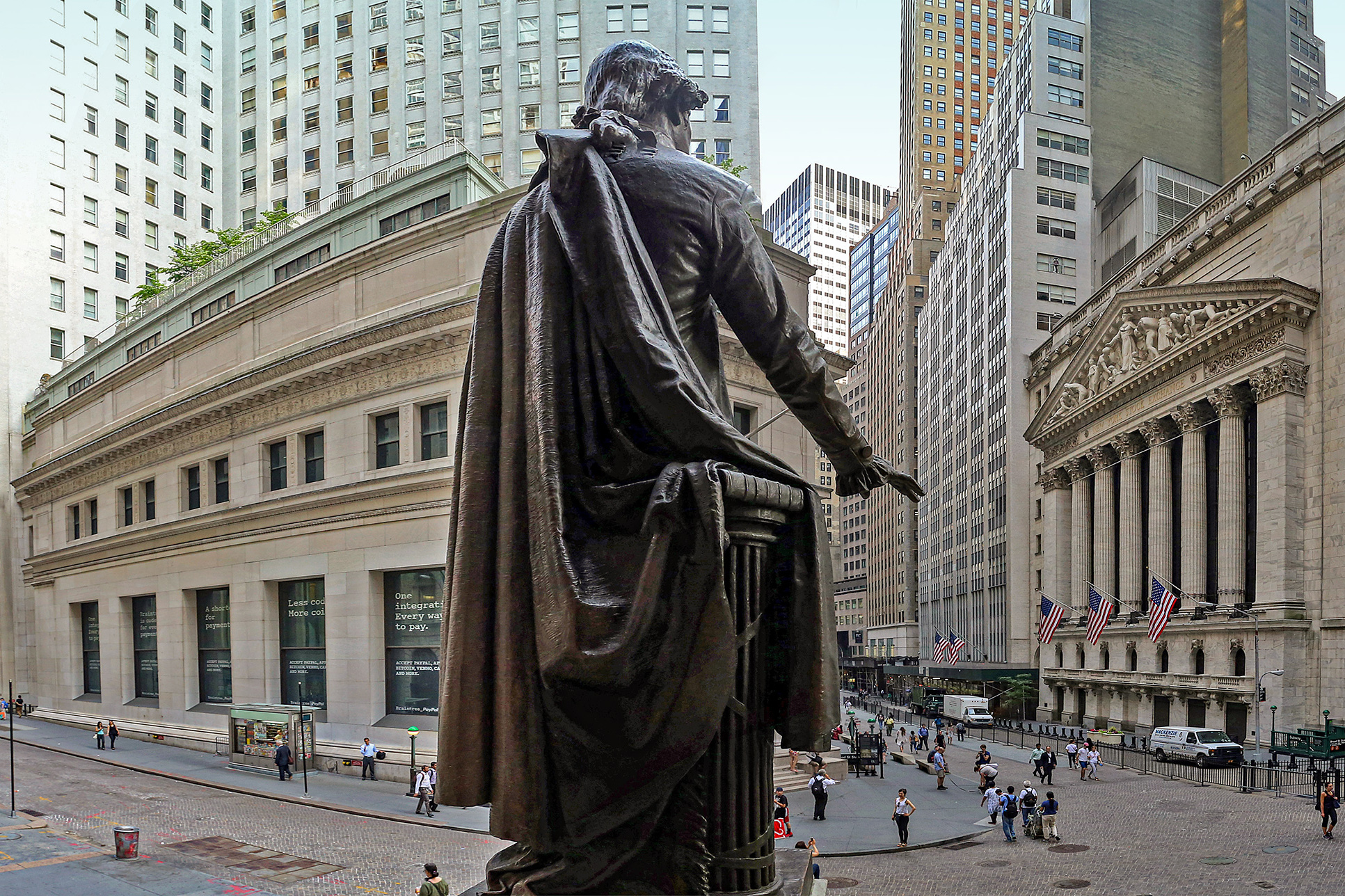 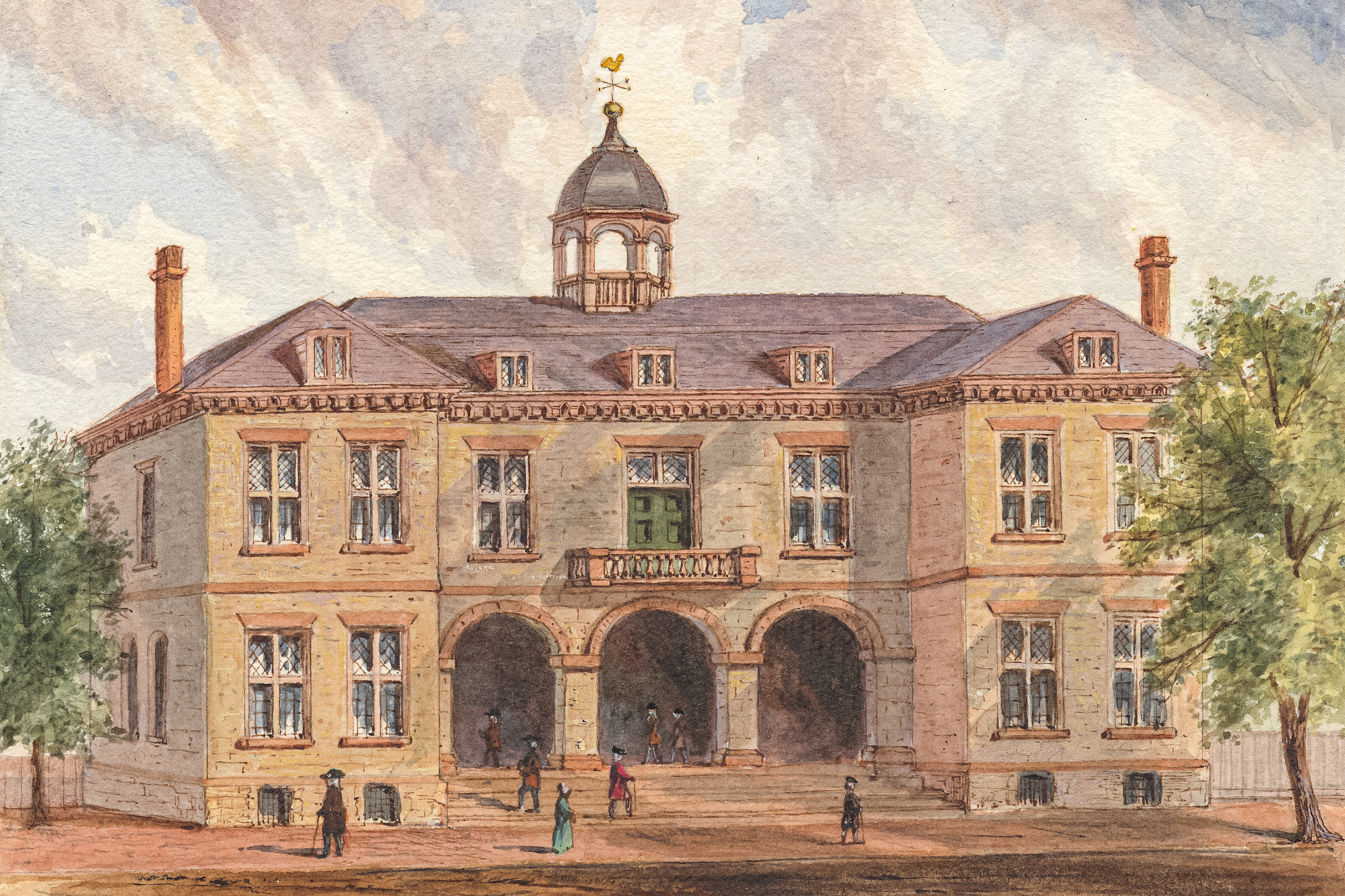 When New York was an English colony, a Royal Governor and an elected council shared legislative powers. Opened in 1704, the New York City Hall was built here on what was already named Wall Street.

After the Revolutionary War, architect and engineer Peter L’Enfant remodeled the City Hall to house the new American government. Renamed Federal Hall, this is where the First Congress convened. George Washington took his Presidential oath of office on the second floor balcony in April, 1789.

Congress left New York in 1790 for Philadelphia and, eventually, moved to Washington D.C. The design of the newly constructed Washington D.C. capitol building evoked classical ideals of democracy. In subsequent decades, many government buildings in the young country were designed in this popular neo-classical style, including the building on Wall Street that we know as Federal Hall today. 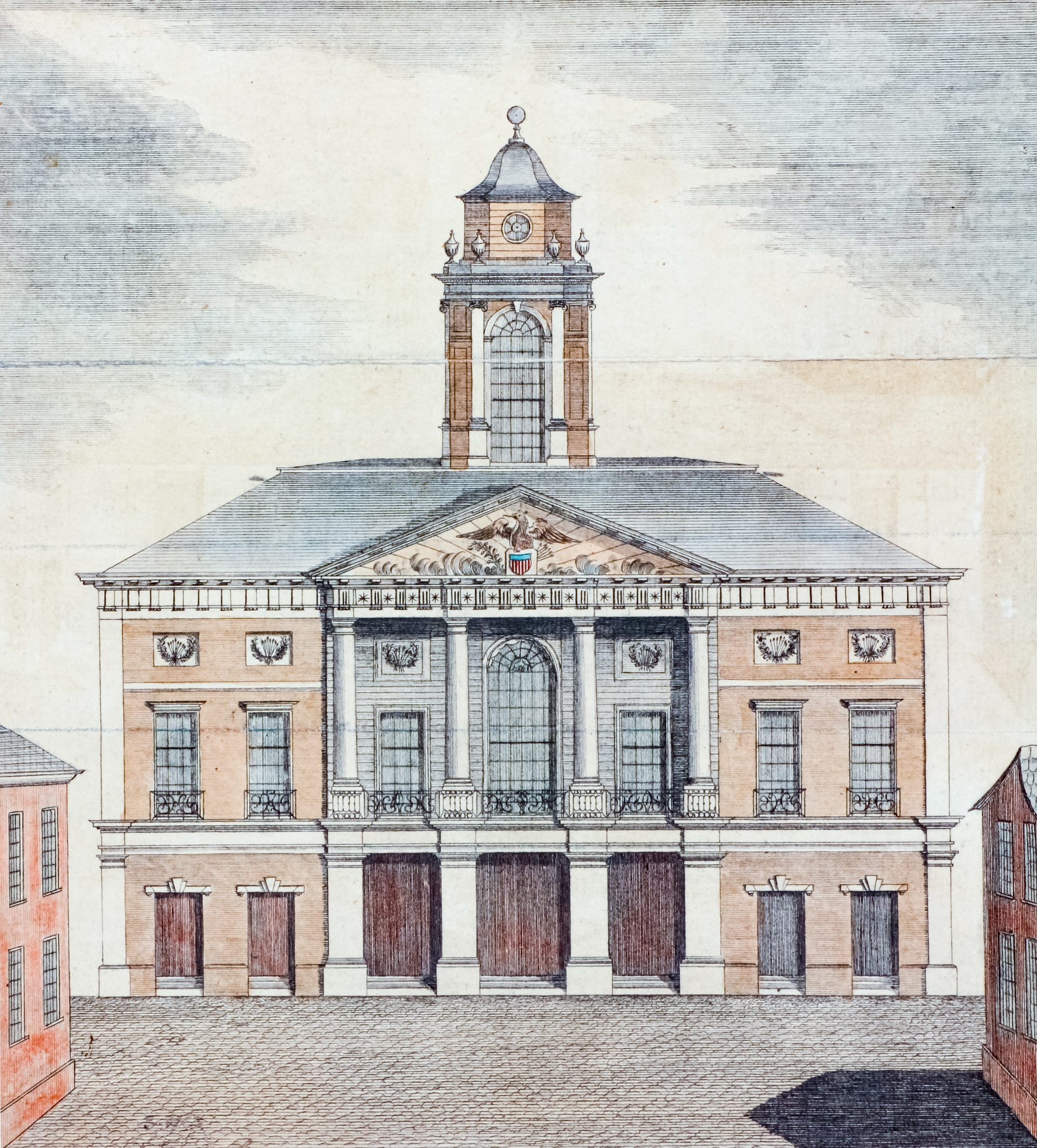 Designed in 1842 by noted architects Ithiel Town and Alexander Jackson Davis as the U.S. Custom House, Federal Hall is a particularly fine example of 19th century neo-classical architecture. It echoes both the Parthenon in Athens and the Pantheon in Rome. The façade is a classic Greek temple form with a broad set of steps that lifts the building up to dominate Wall Street. Inside, supported by 12 granite Corinthian columns, the Grand Rotunda soars 60 feet to a center oculus. Captains from merchant ships harbored in the Port of New York would line up here to pay their custom duties, and the furrows etched by their footsteps are still visible in the marble floor. Duties collected in the thriving port paid most of the federal budget at the time. In less than 20 years, the volume of trade in the country’s busiest port required a larger customs house and one was built further south on Bowling Green. This building was converted in 1862 into a subtreasury to hold the nation’s cash and gold reserves. Millions of dollars were secured here in basement vaults.

On the 150th anniversary of Washington’s inauguration, in 1939, this hallowed space where America began was designated Federal Hall Memorial National Historic Site, and its stewardship was transferred to the National Park Service.

Designed by John Quincy Adams Ward, the George Washington statue was erected in 1883 on a pedestal that elevates it to the exact height of the original balcony where George Washington took the Presidential oath of office. Millions of visitors each year take their photo with this iconic statue. 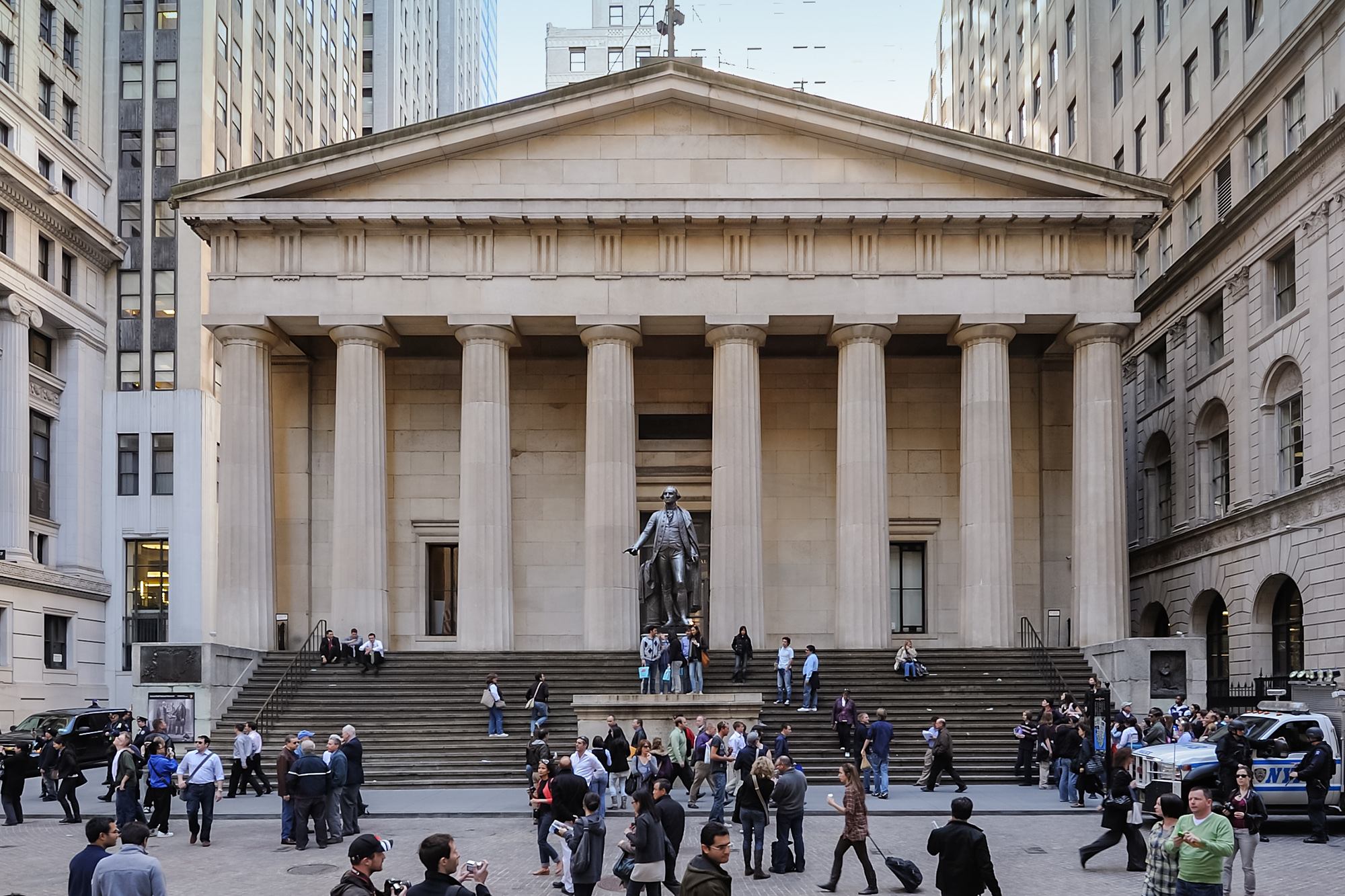 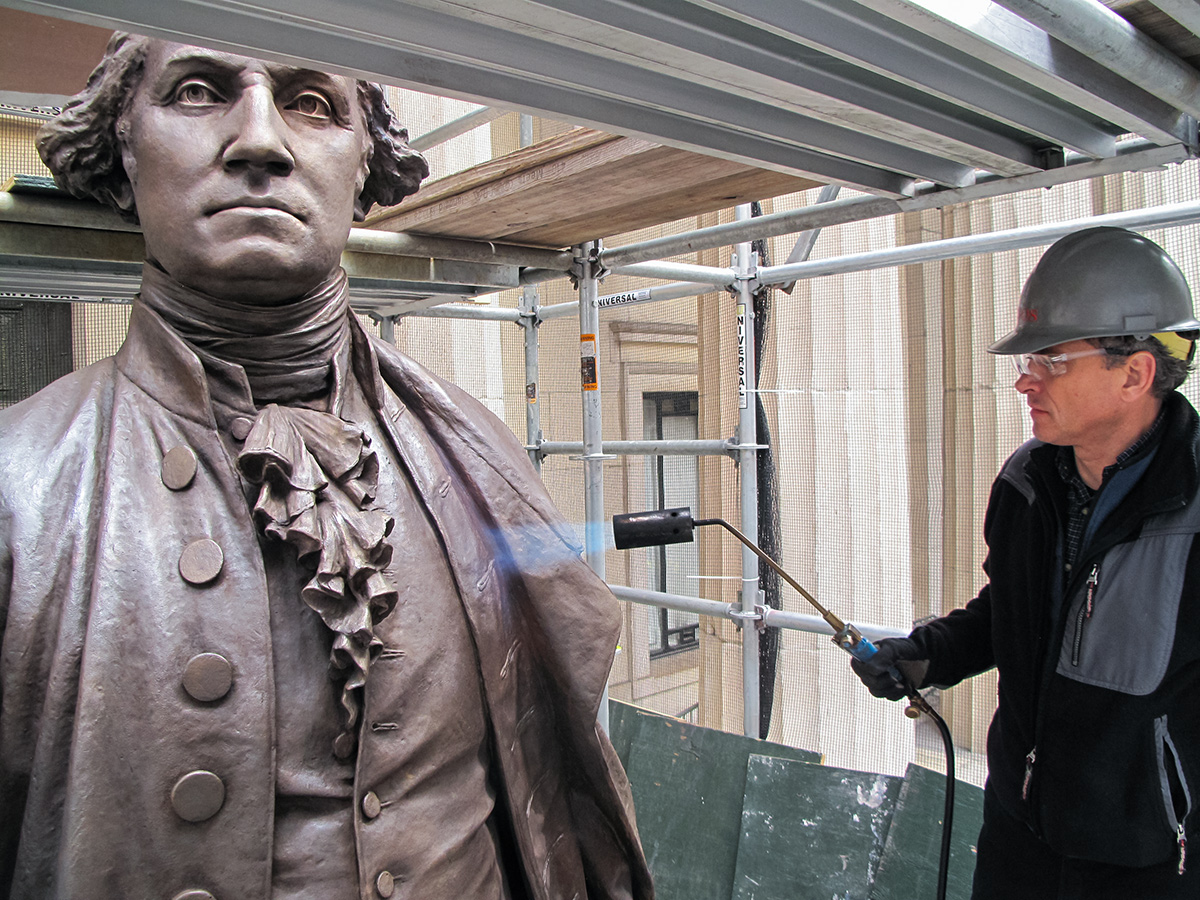 While the Conservancy’s vision for a New Day at Federal Hall will bring exciting programs and exhibitions to Federal Hall, an essential first step has been to meet urgent building preservation and restoration challenges. In partnership with the National Park Service, the Conservancy initially raised funds to restore Federal Hall’s grand staircase and address critical drainage issues that threatened the foundation of the building. This $300,000 project was funded through the National Trust for Historic Preservation and American Express Philanthropy.