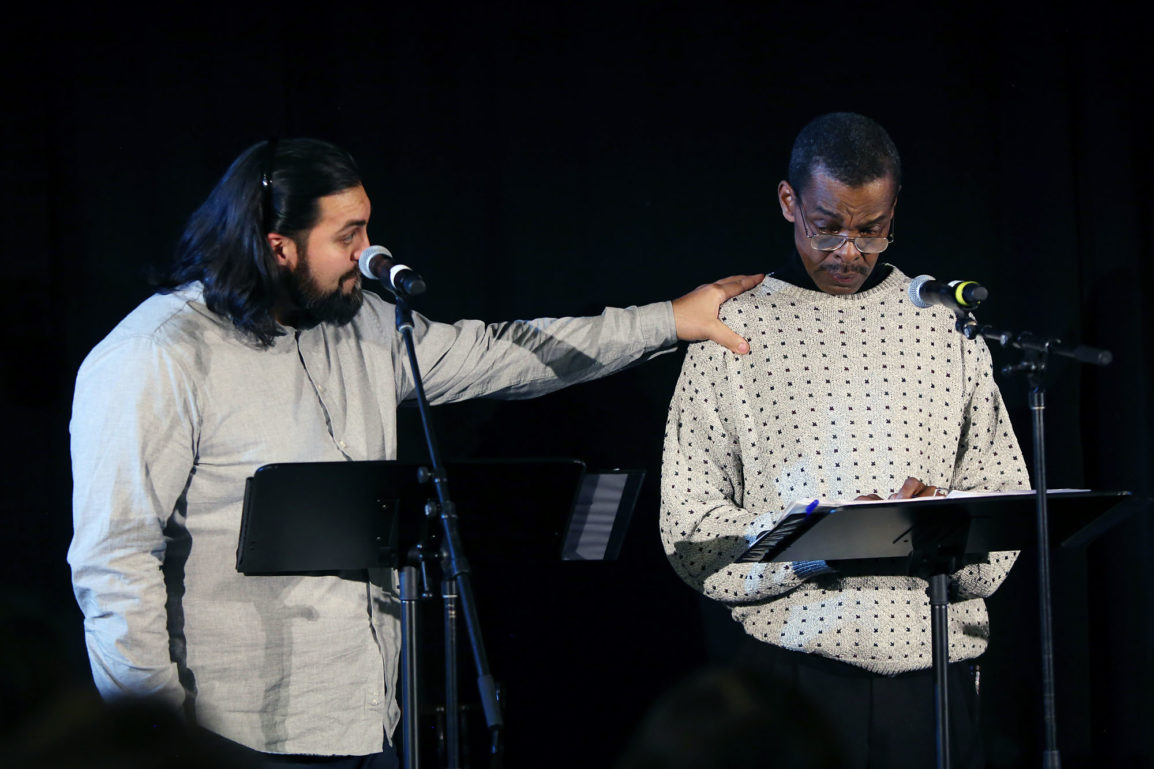 Written by Tanya Barfield, Lisa D’Amour, Larissa FastHorse, Melissa James Gibson, Michael R. Jackson and Bruce Norris, The Democracy Project is a perspective-shifting odyssey through the 531 days when New York City was the nation’s first capital; when the presidency was new; the slave trade was in debate; and the U.S. Constitution — and the rights of all this land’s inhabitants — hung in the balance.

On May 3, go behind the scenes at the Guggenheim Museum’s Works & Process series with this award-winning team of theater artists as they discuss their remarkable collaboration and present performance highlights with script consultant Adam Greenfield, producer Lynn Goldner and playwright David Henry Hwang.

The play begins on the eve of the first Presidential inauguration, as Martha and George Washington wrestle with what it means to be president – for the country, for their family and for the future of the fledgling republic. Their enslaved maid Ona Judge, takes over the narrative, giving her view of the 1790 Quaker campaign to end the slave trade and how founders dealt with slavery. Judge leads the play through our dramatic founding stories, sparring along the way with James Madison as he enumerates the liberties sanctioned by the Bill of Rights and challenging Creek Chief Alexander McGillivray, as he tries to secure his tribe’s future by signing the Treaty of New York.

This new play will premiere in 2020 as part of the inaugural program for Federal Hall, at the site where George Washington was inaugurated as the nation’s first president and the First Federal Congress invented the American republic – a new form of government.

Tanya Barfield’s plays include Bright Half Life, The Call, Blue Door and Of Equal Measure. In 2016, the Profile Theatre (Portland, Oregon) devoted an entire season to Barfield’s work. Tanya is the winner of a LAMDA Literary Award, a Lilly Award and Helen Merrill Playwriting Award. Tanya also writes for television and shares a Writers Guild of America Award for her work on The Americans (FX).

Lisa D’Amour is a playwright and interdisciplinary artist and one half of the OBIE-Award winning performance duo PearlDamour. Her plays, including Detroit and Airline Highway have been produced by theaters across the country. Detroit was a finalist for the 2011 Pulitzer Prize in Drama and the 2011 Susan Smith Blackburn Prize. PearlDamour is known for creating interdisciplinary, often site-specific works, which range from the intimate to large scale. Lisa is the recipient of the 2008 Alpert Award for the Arts in theater, the 2011 Steinberg Playwright Award and is a recipient of the 2013 Doris Duke Performing Artist Award. She is a former Jerome Fellow and Core Alum of the Playwrights’ Center and an alumna of New Dramatists.

Michael R. Jackson is a BFA and MFA graduate of the NYU Tisch School of the Arts. He wrote book, music, and lyrics for the musicals White Girl In Danger and A Strange Loop (premiered at Playwrights Horizons Theatre, co-produced by Page 73 Productions in spring of 2019).

Bruce Norris is the author of Clybourne Park, which premiered in 2010 at Playwrights Horizons and received the Pulitzer Prize for Drama, as well as the Olivier, Evening Standard, and Tony Awards. In 2018, his play The Low Road was produced at the Public Theatre (New York). His latest play, Downstate, was produced at Steppenwolf Theatre, and opened at the National Theatre (UK) in 2019. In 2017, he adapted Brecht’s Arturo Ui for the Donmar Warehouse, London. Other plays include The Qualms, Domesticated, A Parallelogram, The Unmentionables, The Pain and the Itch and Purple Heart, most of which premiered at Steppenwolf Theatre, Chicago, where he is an ensemble member. He lives in New York.

Adam Greenfield is the dramaturg of The Democracy Project. He is the artistic director at Playwrights Horizons, where since 2007, he has been the director of new play development. Prior to this, he was literary manager at La Jolla Playhouse and associate artistic director of The Empty Space Theatre in Seattle. In addition to his work producing, directing and developing new plays, he’s a director whose recent credits include the Humana Festival at Actors Theater of Louisville, 13P, Clubbed Thumb, and
Staff 2 Playhouse Theater in Stockholm.

Lynn Goldner is the producer of The Democracy Project. She is a feature film and television producer. Lynn has several film and television pilots in active development, including a drama about a political asylum case for HBO Films. Her other features include Marvelous, a Sundance Channel feature starring Martha Plimpton and Amy Ryan; The Painted Heart, a Columbia Tri-Star release starring Will Patton and Bebe Neuwirth.

More About The Democracy Project

The Democracy Project artists represent a powerful group of diverse American perspectives. Their vision for the play reaches beyond the traditional narrative of the Founders to give voice to the people who were not represented in the creation of American government at old Federal Hall, but who were and are still deeply affected by the compromises made there.

Beginning with the play, our Conservancy is bringing together the nation’s finest storytellers, scholars, artists, poets, playwrights  – through an array of multi-disciplinary new works – to probe the ideas and ideals, flaws and contradictions of American democracy as created at the site.

More About Works and Process

Since 1984, New Yorkers have been able to see, hear, and meet acclaimed artists in an intimate setting unlike any other. A performing-arts series that explores artistic creation through stimulating conversation and performance in the Guggenheim’s Frank Lloyd Wright–designed, 285-seat Peter B. Lewis Theater, Works & Process commissions and champions new works and offers unprecedented access to some of the world’s leading creators and performers.

Supporters
Major support for developmental workshops and readings of The Democracy Project was provided by the Rockefeller Brothers Fund.