Federal Hall is a place of firsts:

At almost no other time in our history has it been more important than now to understand the legacy of the Founders who came together at Federal Hall to establish the United States of America, a new form of representative government.

Following the Revolutionary War, New York City was established as the U.S. Capital and the former New York City Hall building became Federal Hall, enlarged to house the First Congress. It was here on April 30,1789 that George Washington was inaugurated as the nation’s first president, and the first U. S. Congress passed legislation to establish two cornerstones of America democracy – the Bill of Rights and the federal judiciary.

Ultimately, the U.S. Capital moved to Philadelphia and subsequently Washington DC. The original Federal Hall building was demolished and the current building was erected in 1842 as the U.S. Custom House. In 1939, this building was designated a National Historic Site and its stewardship was transferred to the National Park Service. Sixteen years later, Congress re-designated it Federal Hall National Memorial to commemorate the inauguration of George Washington and the invention of American government.

A public-private partnership between the National Parks of New York Harbor Conservancy and the National Park Service will connect these significant events of the past with today through a transformation of the visitor experience that is currently underway.
Learn more about a New Day at Federal Hall.

Travel back in history with this timeline 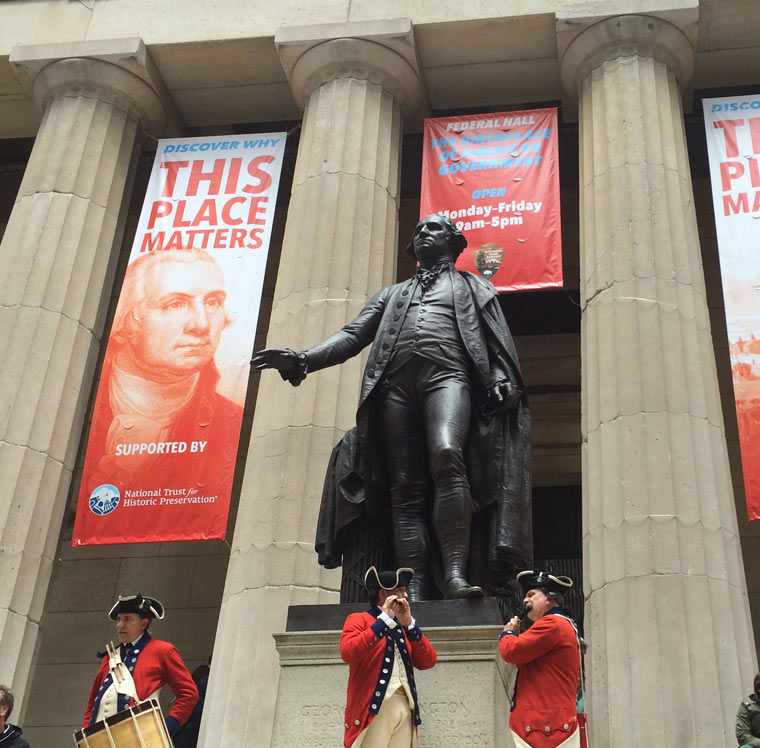 The National Trust for Historic Preservation names the site a National Treasure and supports a public awareness campaign along with restoration of the Wall Street facade and steps. 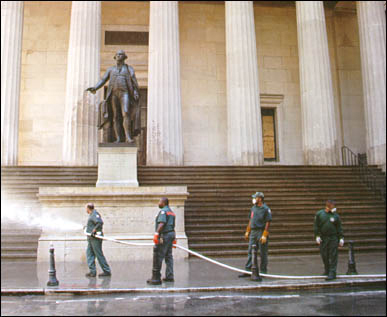 The site serves as a shelter for emergency workers after 9/11. The building suffered structural damage due to the seismic impact of the collapse of the World Trade Center towers and undergoes a $16.5 million structural rehabilitation in 2005. Cracks in the marble, now stabilized, can still be seen on the interior. 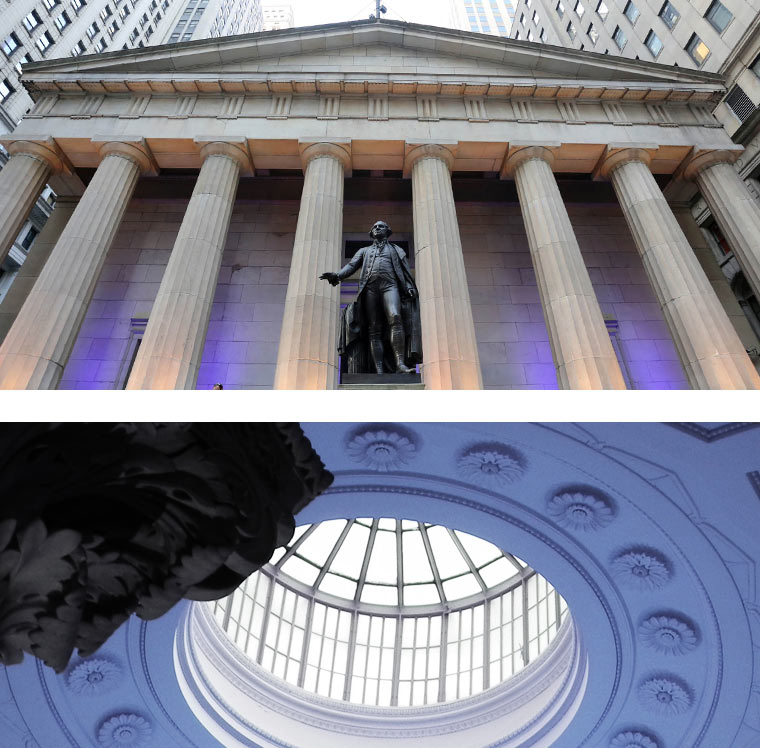 The exterior façade is designated a New York City landmark by the New York City Landmarks Preservation Commission which recognizes it as a “…remarkable pure example of classical temple-form.” In 1975, the rotunda, “…an interior space of imposing grandeur,” is landmarked as well. 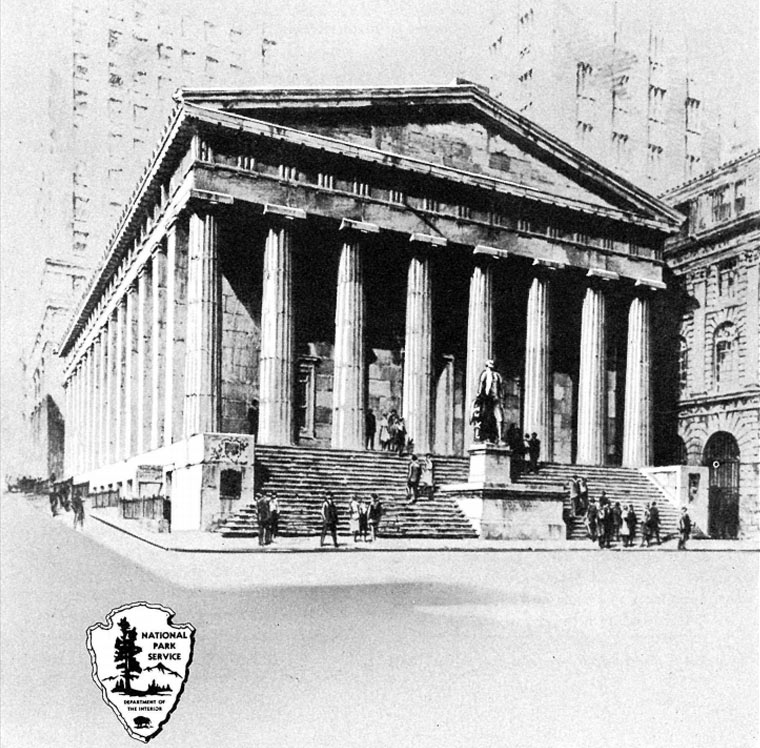 The building is designated Federal Hall Memorial National Historic Site, to coincide with the 150th anniversary of Washington’s inauguration, and its stewardship is transferred to the National Park Service. An exhibit for the 1939 New York World’s Fair, featuring over 450 objects from the Messmore Kendall Washington collection is mounted on-site. 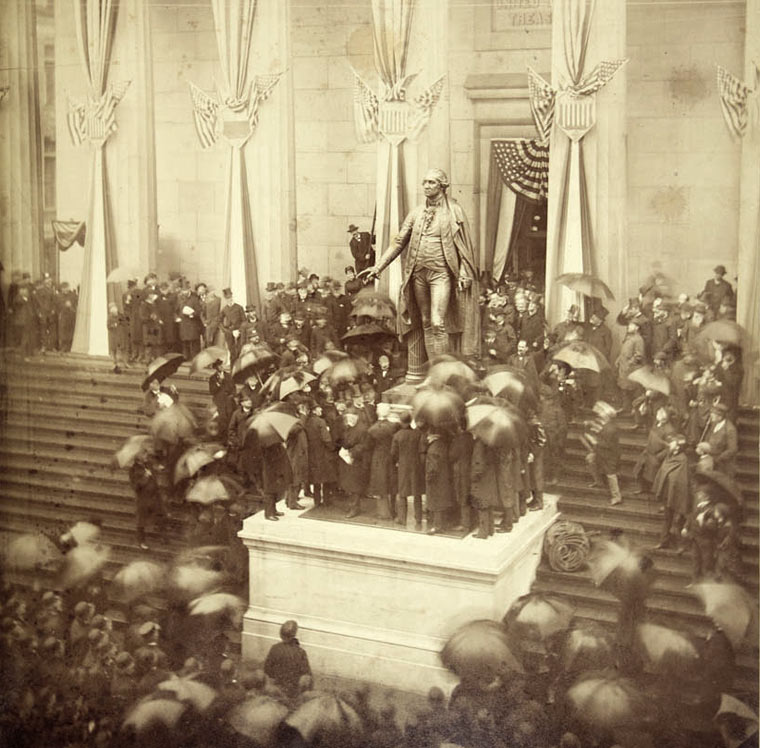 A bronze statue of George Washington by sculptor John Quincy Adams Ward is unveiled on the front steps of the U.S. Sub-Treasury building, marking the exact height Washington stood when taking the oath of office on the balcony of old Federal Hall. 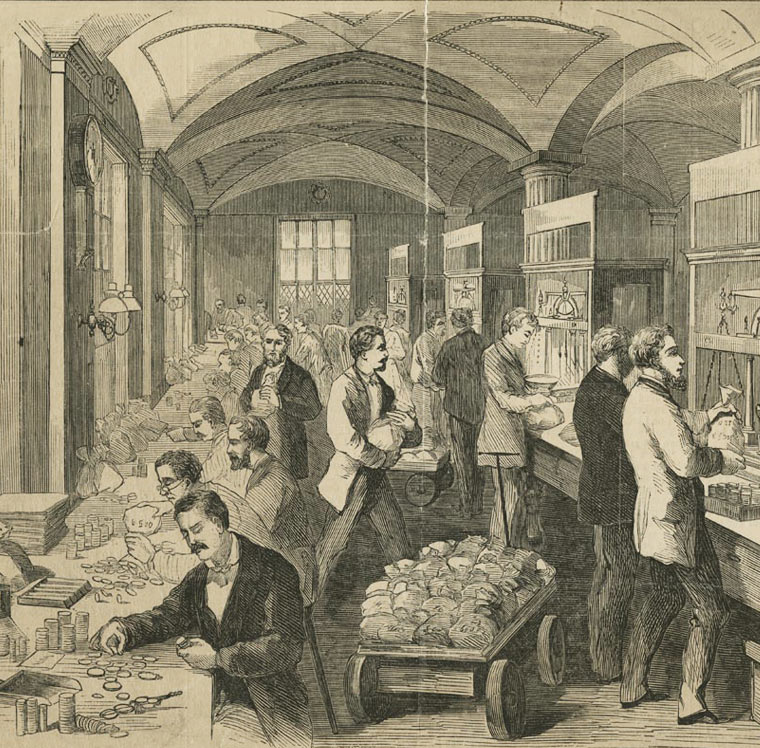 The Custom House, despite its magnificence, was ill-conceived for its function. After only 20 years, custom functions move to a new and larger building on Wall Street. The site is then converted to a Sub-Treasury. In the late 1800s, the New York Sub-Treasury was estimated to conduct over two thirds of the direct money dealings between the government and the public, with annual transactions totaling close to $3 billion. 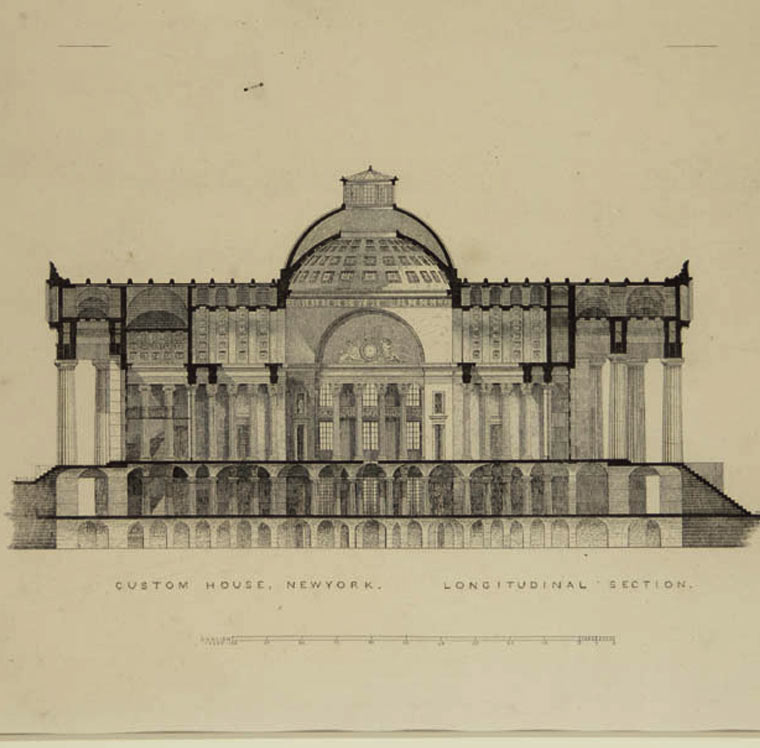 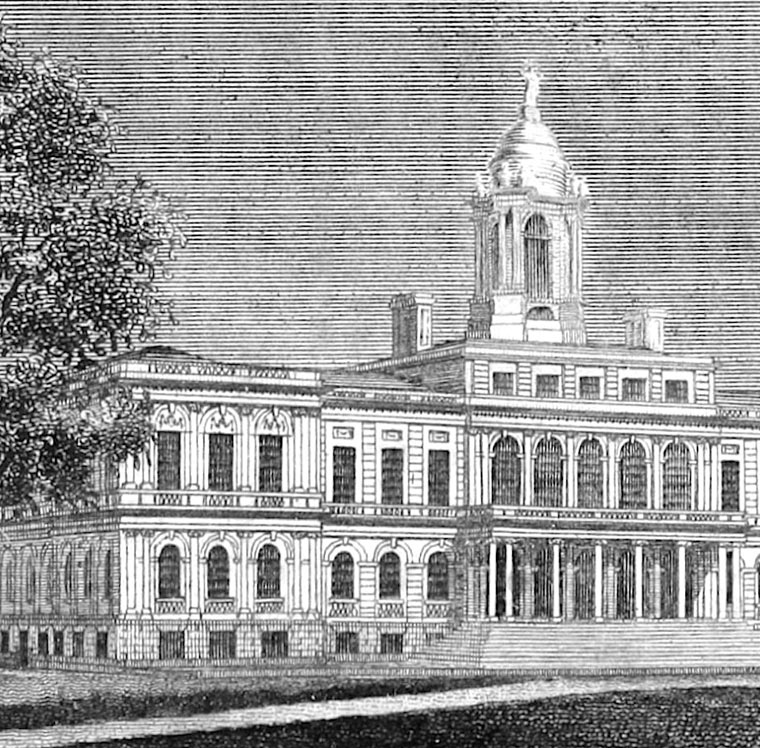 Federal Hall, now dilapidated, is demolished and sold for $425 in scraps to private citizens in favor of a new city hall north of Wall Street. 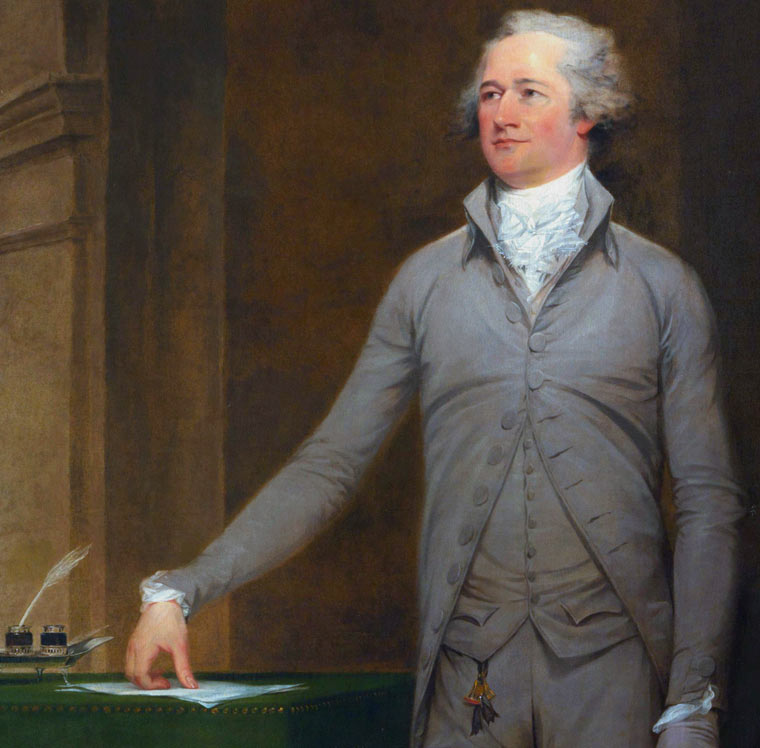 After only 18 months, Congress decamps to Philadelphia for a decade and then, in 1800, to a newly constructed capital city on the banks of the Potomac River—Washington D.C. Federal Hall reverts to its New York State and City functions. The relocation of the capital city was the result of a deal that saw Alexander Hamilton, in a bid to preserve the still unsecured Union, bargain away the capital in return for southern support of the federal government assuming the States’ Revolutionary War debt. 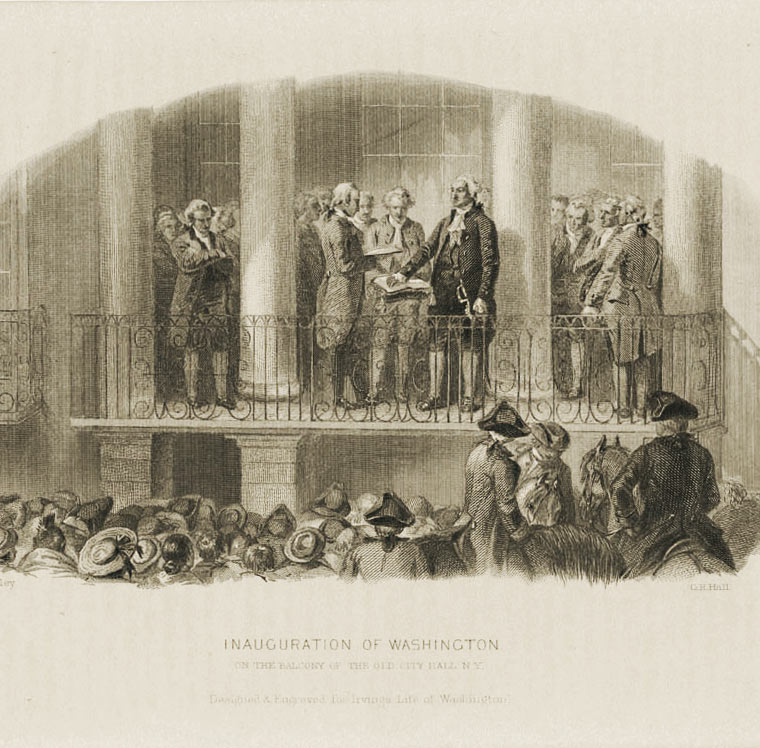 On April 30, George Washington is inaugurated as the new nation’s first President. Convened at Federal Hall, the first U.S. Congress, one of the most legislatively prolific in history, creates the Departments of State, War, Treasury, and Justice. On two days in September 1789 alone, in a crowning achievement, the Congress passes legislation establishing two cornerstones of American democracy — the federal judiciary and the Bill of Rights. 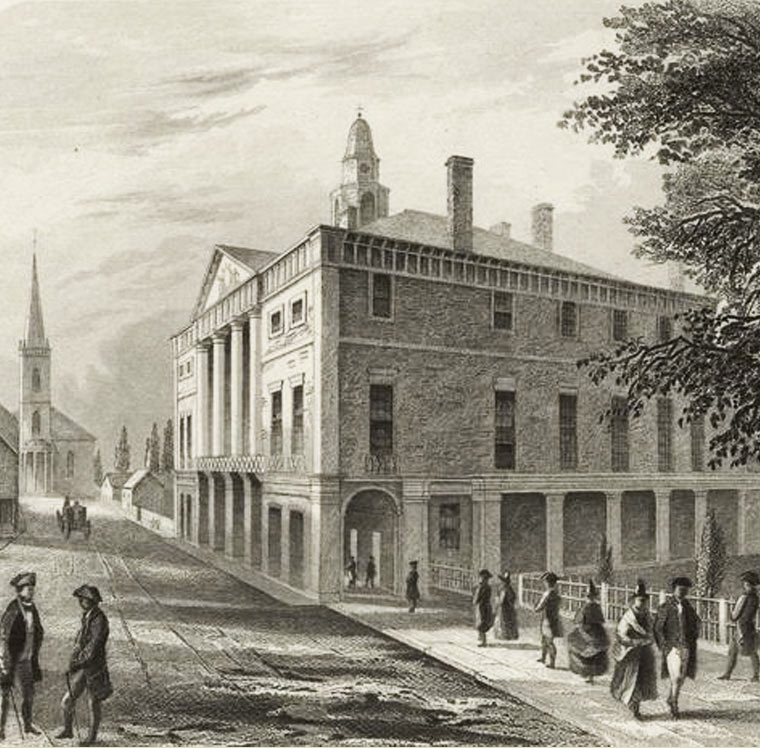 The New York City Council commissions famed architect Peter L’Enfant to enlarge and remodel city hall to host the first Capitol of the United States. L’Enfant’s completed masterpiece is the new House Chamber with a 46-foot-high coved ceiling, windows 16 feet above the floor and two spectator’s galleries. House debates are open to media coverage and the public, a radical departure from past practices, symbolizing the nature of the House as representative of the people under the new Constitution. 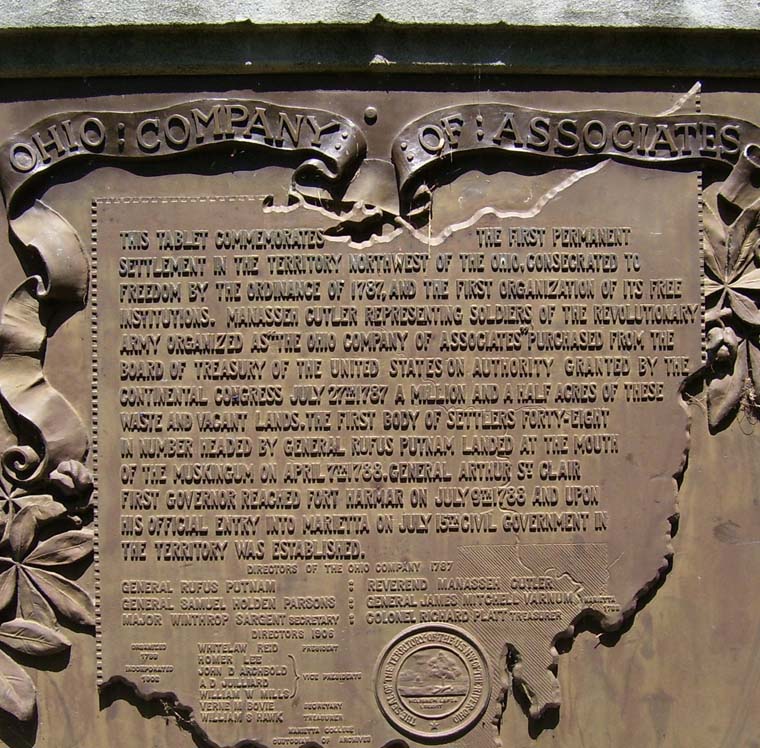 The Confederation Congress, which governed the united colonies after the Revolutionary War, convenes here between 1781 and 1789. During this period, the Congress receives and disseminates the Constitution to the States for ratification and passes the Northwest Ordinance, which provides for governance of the territory northwest of the Ohio River and delivers a key initial blow against the expansion of slavery in the United States. 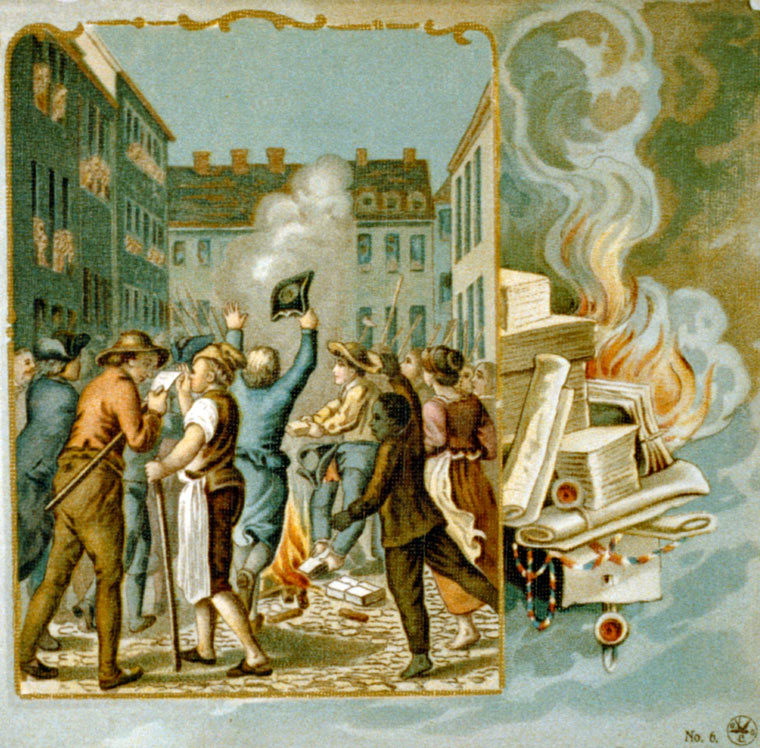 Delegates of nine American colonies convene at City Hall to formulate a response to the British Parliament’s new Stamp Act. After 19 days, this “Stamp Act Congress” issues a Declaration of Rights and Grievances to the King and Parliament, calling for equal treatment of the colonies. The Act was repealed in 1766, but it had already precipitated this first organized opposition, providing an intellectual foundation for the revolution to come. 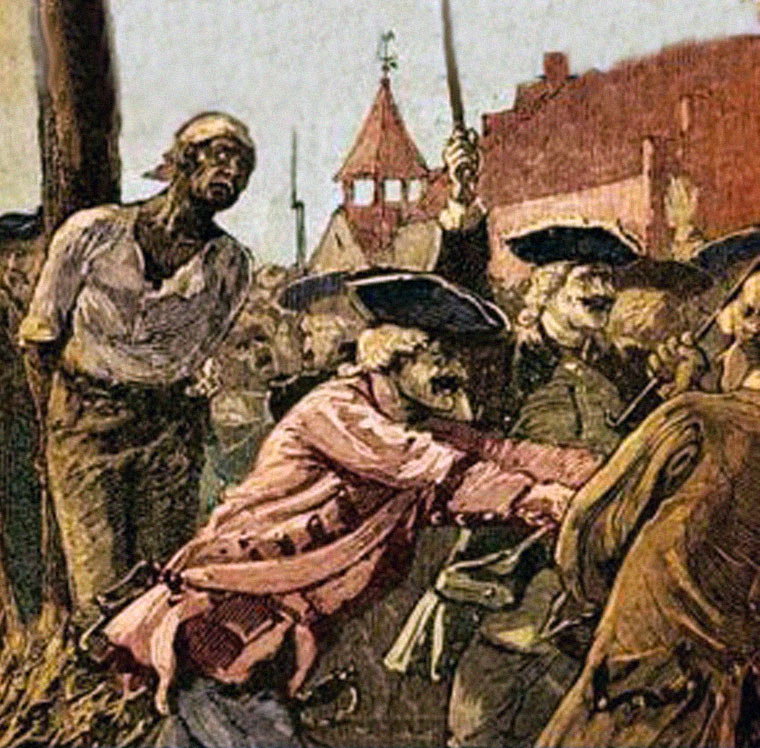 Enslaved and free people are tried on charges of conspiracy to commit insurrection, after 10 fires sweep through Manhattan in quick succession. In a wave of public hysteria, likened to the Salem Witch Trials, 200 are arrested and thrown into jails beneath City Hall. Though the evidence is inconclusive, approximately 35 people, including 30 African Americans, are convicted and sentenced to death by hanging or burning at the stake. 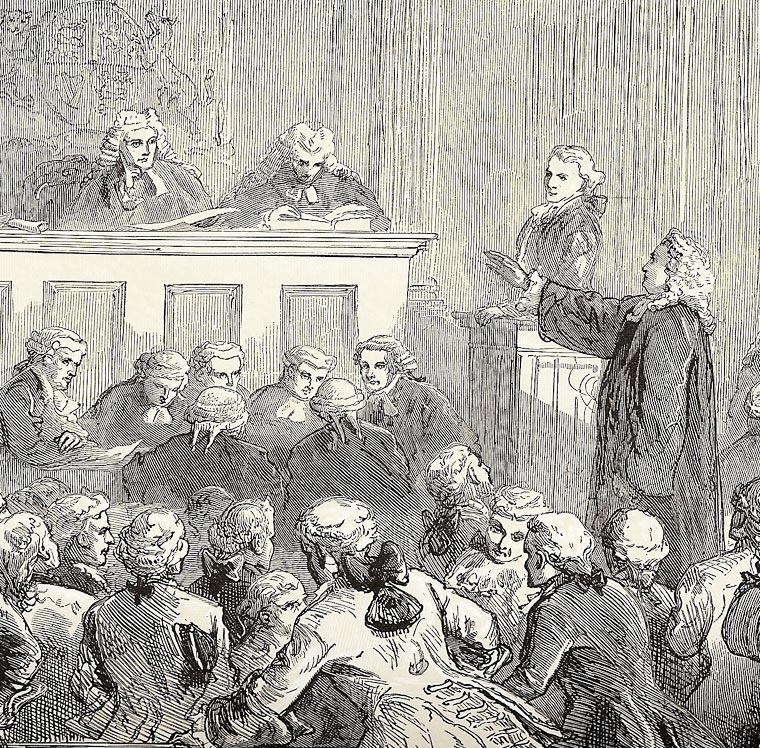 The trial of German American printer John Peter Zenger on the charge of seditious libel for printing a series of articles criticizing the royal governor takes place in the courthouse. Delivering an early victory for a free press, codified by the First Amendment over half a century later, Zenger’s lawyer successfully argues to the jury that truth is an absolute defense against libel. 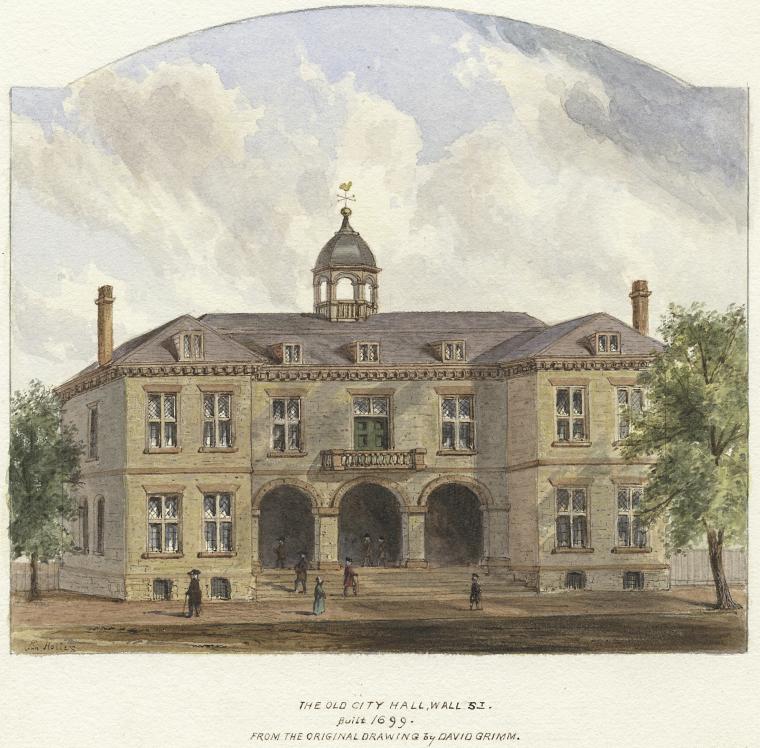 Construction of the new British colonial New York City Hall begins on the site of today’s Federal Hall. It was completed and opened in 1704. Housing the seat of the Governor’s Council, New York Assembly, Supreme Court and the city jail, it would remain the major seat of government of New York City for over a century.
Image: The original City Hall. NYPL Digital Collections.

At almost no other time in our history has it been more important than now to understand the legacy of the founders who came together here at Federal Hall to establish the United States of America a new form of government, for and by the people.

New Day at Federal Hall will connect the sesignifican t events of the past with today through transformation of the visitor experience at Federal Hall National Memorial. The effort, a public - private partnership between the National Parks of New York Harbor Conservancy and the National Pak Service, addresses three main challenges: Education , Restoration and Financial Sustainability

Tonio Burgos is the Chairman of the Conservancy. He is the founder of Tonio Burgos & Associates Inc., a consulting firm which serves a wide range of clients in both the public and private sector across the tristate area. Tonio has served as a member of the Advisory Committee of Lower Manhattan Economic Development Corporation on Transportation issues; as a Commissioner of the Port Authority of New York and New Jersey, and as a Director of the PATH Commuter Rail System

Marie Salerno is the President and Co-Founder with the late Marian Heiskell of the Conservancy. For 40 years, she has produced multi-faceted campaigns for New York’s cultural,
literary and educational institutions, including The New York Public Library, Thirteen/WNET, New York Magazine and NYC 100: Greater New York Centennial Celebration.

Renee Barnes has more than a decade of experience developing public programs for national parks. As Director of Programs and Operations for the Conservancy, she oversees implementation of its public programs as well as its planning and restoration projects.

Lynn Goldner is a film and television producer, who has developed projects for premium cable channels such as HBO and Sundance Channel. She is the Federal Hall producer working to secure the creative talent and partnerships for The Democracy Project and a Grand Rotunda experience.

Laura Herrera and Brandi Marks are co – founders and managing partners of Full House Events, each with nearly two decades of experience in several industries, including travel and tourism, government, nonprofit fundraising and event production. Full House is developing partnerships and a facilities rentals program for Federal Hall.

Bonnie Levinson ’s career working in the arts with cultural institutions spans three decades, most recently as deputy director for external affairs at the San Francisco Museum of Modern Art and as a trustee of several arts organizations including San Francisco Art Institute and EnGardeArts. As a consultant to Federal Hall, she is developing the visual arts and residency programs.

David Taggart has a long career in media and marketing. He specializes in spon sorships, marketing, activations and project development. He is also an award-winning photographer and founder of the social media platform,
Republic of Humanity

Want to worship with us?