The Art of Democracy

Shall Make, Shall Be: The Bill of Rights at Play

This exhibition at Federal Hall is the presentation of a curatorial project which invited 10 independent artists and game designers to create playable artworks themed around the individual amendments in the Bill of Rights, drawing on their effects, interpretations, and legal meanings in U.S. culture.

On September 25, 1789, 12 Amendments to the still fledgling U.S. Constitution were enacted at Federal Hall by the first Congress. Sent to the States for ratification, ten would be approved and become known as the Bill of Rights. Stewarded by Representative James Madison, this codification of individual rights, was an integral compromise for the unification of the United States.

Alongside this history, is the recognition and duty to communicate that this exhibit sits on Lenapehoking: a land originally inhabited by the Indigenous Lenape peoples who continue to live in New York City and beyond.

These works are intended to be understood as critical games, using the mechanisms of play to interrogate, critique, and inform common understanding of civil liberties in the 21st Century. 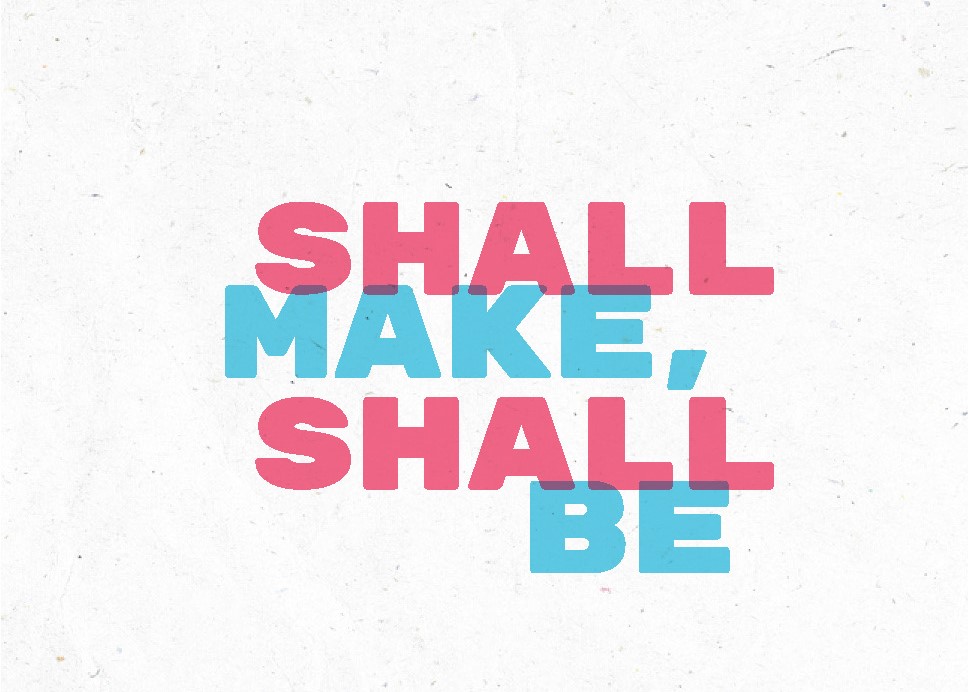 Curated by R. Luke DuBois, Laine Nooney, and John Sharp, Shall Make Shall Be invited artists to explore the meaning and impact of the amendments that compose the Bill of Rights. The resulting games and interactive artworks come from their points of view, and reflect on the meanings and implications of the framework used to articulate the rights of citizens.

For more information, including future event schedules and the forthcoming exhibition catalog, and to join the Shall Make Shall Be email list, visit shallmakeshallbe.org.

A playable game/musical instrument/sound station that explores ideas embedded in the First Amendment.

An interactive sculpture that explores aspects of the Second Amendment via an interactive puzzle which utilizes an accidental musical composition as a timing mechanism.

An existential horror I-spy computer game that includes animation and narration based on the modern implications of the Third Amendment.

A project using the Fourth Amendment exploring how structural injustice intersects with the law to create broken systems.

A project which utilizes a visual novel (VNs) format to navigate cases that the Fifth Amendment protects citizens from, but using a Phoenix Wright: Ace Attorney VN style which focuses on satire and ‘NPC to Player’ interactions.

A first person, voice-controlled video game, in which game-space is mapped onto the semantic field of the Sixth Amendment.

A head-to-head match played across a two-faced arcade cabinet. Players stand on designated squares across from each other, moving to the rhythm of music.

Cruel and Usual: Evolving Standards of Decency
Danielle I. Butler

An Eighth Amendment themed pinball game, set in the complex world of our penal justice system.

Loosely adapting the legal concept of “penumbral reasoning”, the work presents a terminal-like interface on a vertical monitor.

USING THE ARTS TO EXPLORE DEMOCRACY

The first work of art commissioned for Federal Hall was the statue of George Washington on its grand staircase. One of the most iconic—and photographed—statues in New York City, it was commissioned by the New York Chamber of Commerce in 1881, to commemorate the inauguration of America’s first president on the very spot where he stood. But as the journey of democracy continues in America, the arts are a powerful way to tell a fuller story about the founding of the nation.

Federal Hall itself is a canvas for the visual arts where we can reimagine our historical images. In collaboration with the National Park Service, for over four years the Conservancy has been presenting exhibitions on the inside and the outside of Federal Hall that bring new perspectives to our collective history, showcase diverse artists, and open our imaginations to the past, the present and the future as the nation works toward “a more perfect union.”

The Reflections on Democracy program and The Democracy Project play are also part of the Conservancy’s commitment to tell the larger narrative of America’s history at Federal Hall. 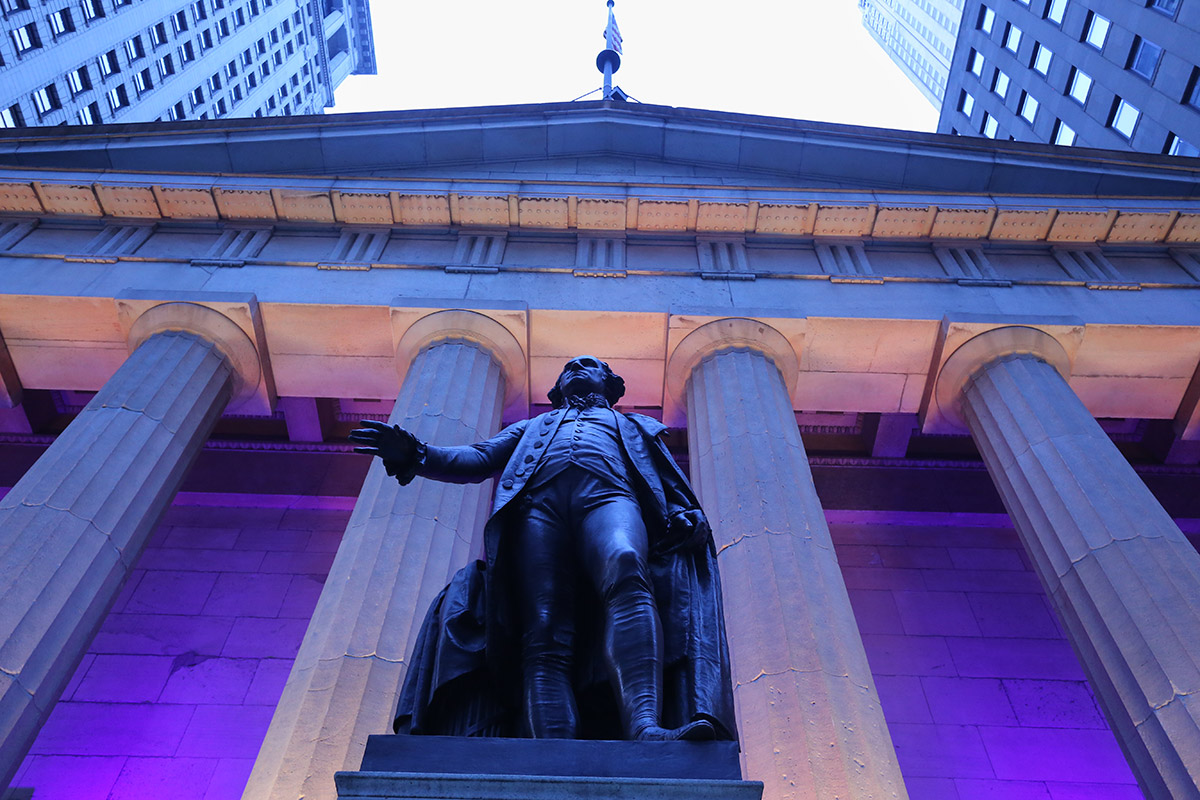 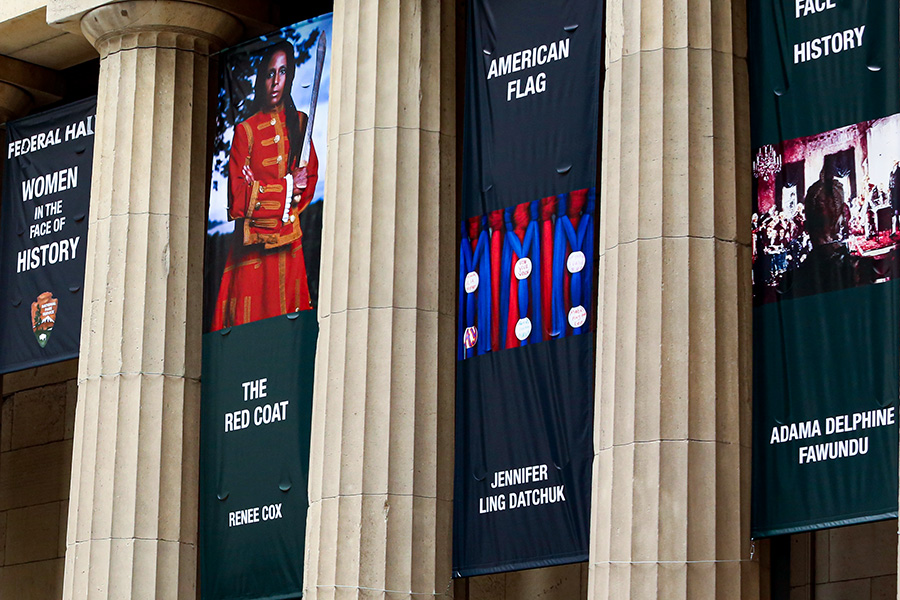 Women in the Face of History

Curated by NYU’s Dr. Deb Willis and Ellyn Toscano, this installation on the facade was part of the 100 Years/100 Women project organized by the Park Avenue Armory with NYU and other NYC cultural partners. In 2021, six of the 100 commissioned artists, invited to interrogate the complex legacy of women’s suffrage, presented these works at Federal Hall. They included: Renee Cox, Jennifer Lin Datchuk, Rose DeSiano, Adama Delphine Fawundu, Yelaine Rodriguez and Deb Willis.

Women in the Face of History

Curated by NYU’s Dr. Deb Willis and Ellyn Toscano, this installation on the facade was part of the 100 Years/100 Women project organized by the Park Avenue Armory with NYU and other NYC cultural partners. In 2021, six of the 100 commissioned artists, invited to interrogate the complex legacy of women’s suffrage, presented these works at Federal Hall. They included: Renee Cox, Jennifer Lin Datchuk, Rose DeSiano, Adama Delphine Fawundu, Yelaine Rodriguez and Deb Willis. 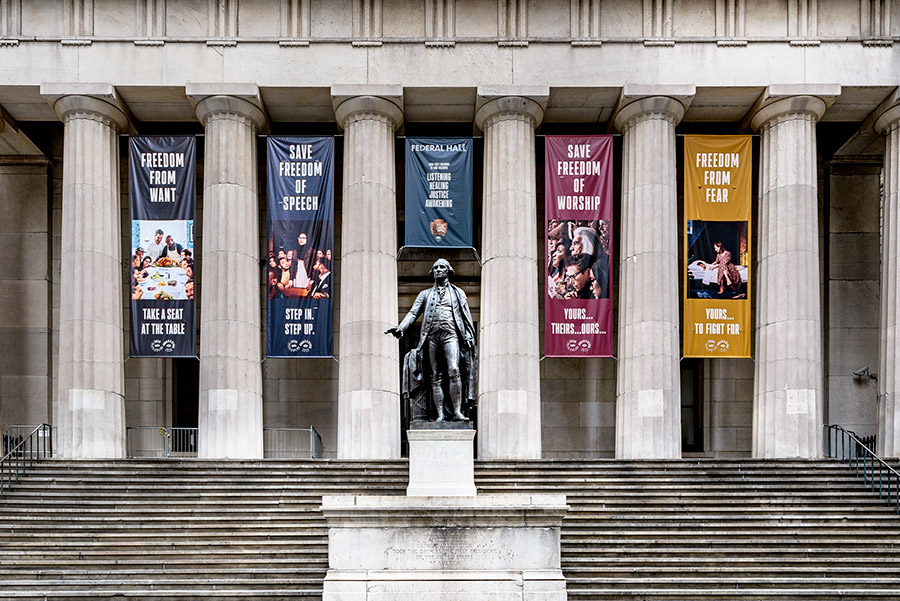 Artists Hank Willis Thomas and Eric Gottesman along with photographer Emily Shur, designed this first art installation on Federal Hall’s facade. The images on the banners were a re-imagining of a 1943 series of Rockwell paintings, inspired by FDR’s articulated Four Freedoms.

In 2020, For Freedoms, an artist collaborative formed to increase civic engagement amongst artists, arts institutions, and citizens, launched a nation-wide campaign ahead of the Presidential Elections to promote voting. Awakening 2020, featured exhibits, artist-led townhalls as well as artists designed billboards across all 50 States, including these four at Federal Hall. Designed by For Freedoms co-founders Hank Willis Thomas and Eric Gottesman with photographer and designer Emily Shur, the images were a reimagining of Norman Rockwell’s 1943 series of paintings, Four Freedoms, which were inspired by the four freedoms articulated by FDR: Freedom from Want, Freedom of Speech, Freedom of Religion and Freedom from Fear. The artists re-staged Rockwell’s scenes with people who represented the diversity of America today. 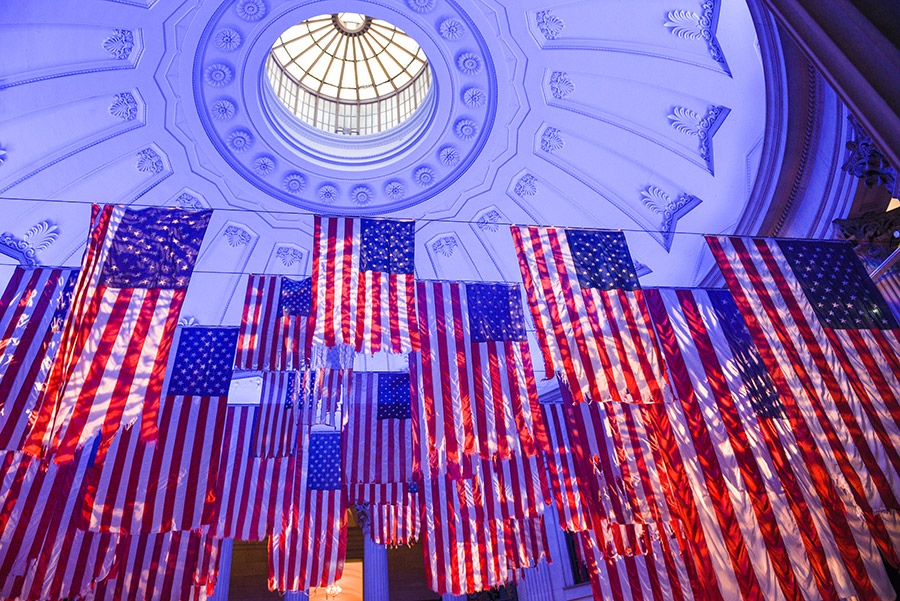 When the artist Mel Ziegler’s flags from all 50 states were exhibited in the Grand Rotunda, more than 100,000 visitors entered Federal Hall to view the patriotic display.

Between 2011 and 2016 artist Mel Ziegler journeyed through all 50 states and replaced distressed American flags flying at civic and private locations — city halls, post offices, hospitals, homes, and schools — with new flags. The 50 tattered flags he replaced form a powerful artwork, Flag Exchange. Exhibition curator Hesse McGraw said, “Ziegler’s work presents a hopeful and direct image of these United States of America, one that is grounded in conversation with people unlike ourselves, coursing with empathy for their perspectives, and reveals the subtle yet powerfully disarming gift of creativity. Ziegler’s act of sly and generous alchemy is a potent reminder that artists do new and vital things for our public life, by finding the common ground that we have otherwise lost.” 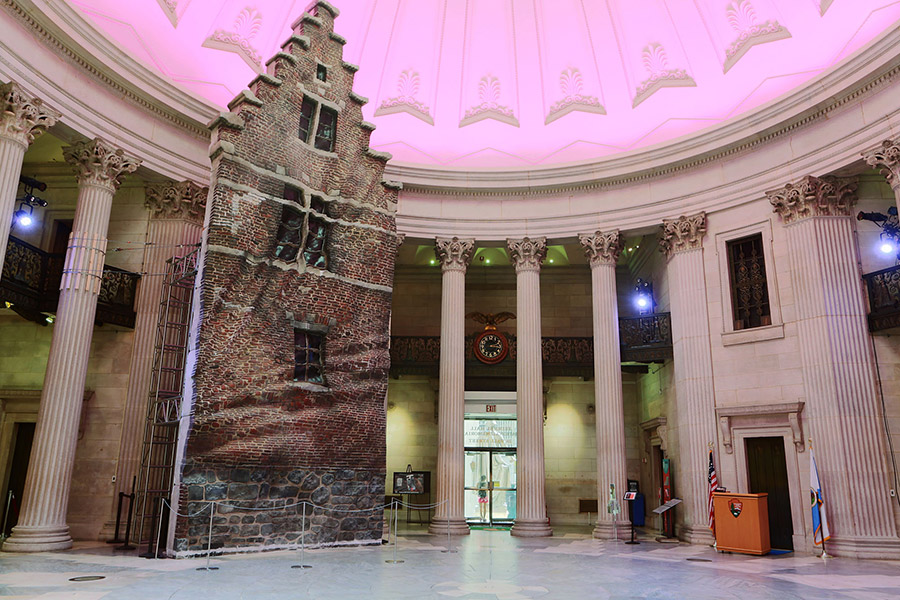 Artist Brian Tolle exhibited Eureka, a sculptural façade of a 17th century canal house, alongside a rare viewing of The Flushing Remonstrance, a 1657 document that was a precursor to religious freedom.

This extraordinary dual exhibition at Federal Hall paid homage to the legacy of 40 years of Dutch rule in New York. Brian Tolle’s 40-foot high sculpture named EUREKA reflects a rippling and distorted facade of a 17th century Dutch canal house. Essentially a facade of a facade, its Dutch inspired form points to New York’s early history and its fluid, but troubled, transformation from a Dutch seat of power to British colony, to an American platform for diversity and democracy. The sculpture is a mirage of a building that has been displaced and no longer exists like the Dutch buildings and the canal that was once Broad Street — erased with only the street names lingering as a reminder of their existence. First on view in Ghent, Belgium Tolle chose to exhibit EUREKA alongside a rare viewing of The Flushing Remonstrance, the 1657 New Netherland petition for “liberty of conscience” that served as the precursor to the guarantee of religious freedom cemented in the First Amendment written at Federal Hall over a century later. Not seen in Manhattan in over 30 years, the Remonstrance, on loan from the New York State Archives, shared an exhibition room with the Bible from President Washington’s 1789 inauguration at Federal Hall.